Authorities have linked several recent murders in the Washington, DC area to alleged members of Mara Salvatrucha, or MS13, suggesting the organization’s El Salvador-based leadership may be moving to consolidate its relationship with US-based “cliques”.

Read this piece in its entirety at InSight Crime.

The U.S. Drug Enforcement Administration (DEA) has released the latest version of its annual National Drug Threat Assessment, which highlights several ongoing trends related to organized crime and the drug trade in the United States:

This year’s report, like the 2013 and 2014 versions, ranks controlled prescription drugs (CPDs) as the most dangerous category of substances, pointing out that “every year since 2002 the number of deaths attributable to CPDs has outpaced those for cocaine and heroin combined.” However, a crackdown on black market prescription drugs may have had the unintended consequence of helping push down heroin prices, prompting some prescription opioid users to switch to heroin as a substitute. In addition, the DEA reports that seizures of heroin in the United States have almost doubled since 2010, indicating an increase in supply particularly from Mexico. The growing problem of heroin abuse has made national headlines recently, and several prominent figures have called for the federal government to do more to address the issues of opioid addiction and heroin trafficking. 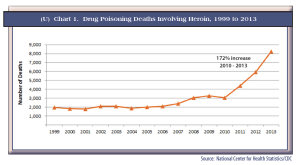 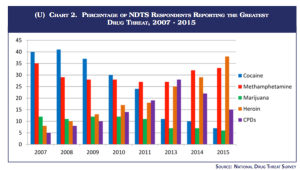 2. Dominance of Mexican crime groups in the wholesale drug market.

The DEA assesses that “[t]here are no other organizations at this time with the infrastructure and power to challenge” the control of Mexican transnational criminal organizations (TCOs) over the U.S. market for drugs like like marijuana, cocaine, heroin and methamphetamine. The Sinaloa cartel maintains a nationwide presence as “the most active supplier” of illicit drugs in the United States. At the same time, the DEA points out that the Cartel Jalisco Nueva Generación (CJNG) “is quickly becoming one of the most powerful TCOs in Mexico and in some cases rivals Sinaloa cartel trafficking operations in Asia, Europe and Oceania.” A top Mexican law enforcement official recently claimed Sinaloa and CJNG are the only two “operating and functioning” drug cartels in Mexico, but as the maps below show, the reality is much more complicated.

The landscape of Mexico’s underworld seems to have undergone an evolution similar to that experienced in Colombia in recent years. Formerly hierarchical groups have fragmented into increasingly fluid networks that are more resilient to the loss of top leaders. As the table below shows, most major Mexican criminal organizations have ties to several U.S.-based gangs, who in turn distribute drugs for more than one cartel. According to the DEA, Colombian groups that have traditionally controlled the heroin and cocaine trade on the East Coast have begun to distribute those same drugs using Mexican suppliers. The assessment also reports that Dominican organizations, which tend to be more hierarchical, serve as mid-level distributors of heroin and cocaine for both their Mexican and their Colombian counterparts.

According to the DEA, “Asian TCOs operate mainly on the West Coast, but are increasingly spreading their operations throughout the United States.” Asian crime groups also reportedly have a growing presence in other countries in the Americas. The DEA assesses that these organizations “dominate the US market as the primary suppliers of MDMA,” also known as “ecstasy,” which is often “imported from China to Canada, or produced in Canada, and then smuggled into the United States.” Like other organized crime groups, Asian TCOs also traffic in other drugs and precursor chemicals, and “are involved in a variety of illicit and violent activities in addition to drug trafficking,” including the arms trade, human and sex trafficking, cybercrime, fraud and money laundering. 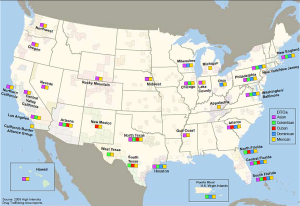 While the DEA reports that “bulk cash smuggling is still the most widely-reported method used by TCOs to move illicit proceeds,” trade-based money laundering schemes like the Black Market Peso Exchange also remain popular. In addition, “exploitation of casinos for money laundering has increased as US casino companies have expanded internationally, opening branches in China, the Philippines, and Latin America…Money launderers exploit this system by placing or structuring drug proceeds into a US casino and then withdrawing the money at an international branch.” The report also mentions virtual currencies, which are largely unregulated by government entities, as an increasingly common means of laundering money. 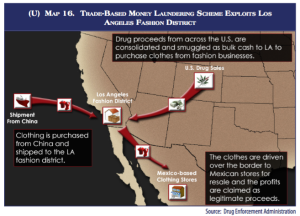 At the 27 June 2014 Central American Integration System (SICA) meeting, Costa Rican President Luis Guillermo Solís Rivera described the flight of emigrants and refugees (especially unaccompanied children) from the so-called Northern Triangle countries of Guatemala, Honduras and El Salvador as “one of the greatest tragedies of our region…”

Read this piece in its entirety at Southern Pulse.